Once again I made the  early morning trek to Arkansas, crossed the upper Lil Missouri at 8:30 AM Saturday, and headed up the ABF trail in an attempt to complete the loop counterclockwise.  I had missed getting to do this with friends a month earlier due to knee issues.  Since then I’d seen an orthopedist, a podiatrist, tried a dozen pairs of alternative trail shoes and inserts, and finally settled on inserts from the doc in my present Salomon trail runners, which I was glad to get to keep. I'd started doing extra exercises for the knees and taking OsteoBi-Flex with glucosamine and chondroitin. 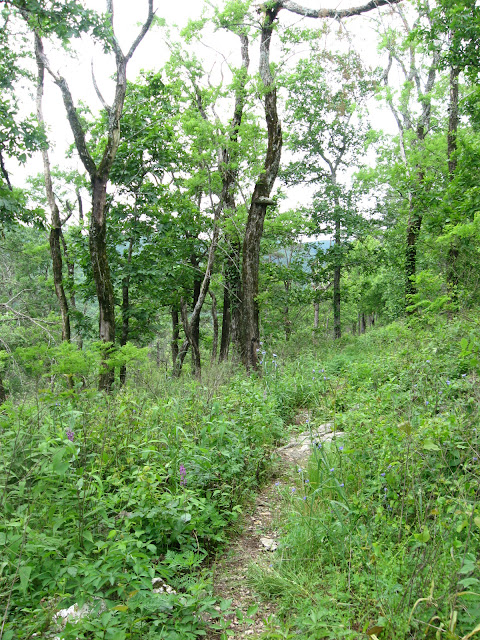 Honeysuckle bloomed in spots along the trail, its fragrance a reminder of summer just around the corner. A new array of wildflowers were in bloom as well. I took it slow; there was no hurry, I had three days. I marked downed trees and campsites as I came to them. I sat and listened to a creek murmur, whispering to me how blessed I was to be there enjoying another magnificent day in the wilderness. I crossed 601 at 1:10. So far, so good, but I still had Brush Heap ahead. 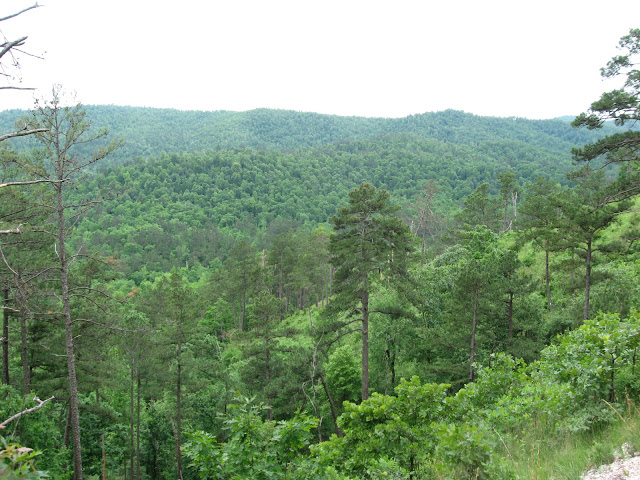 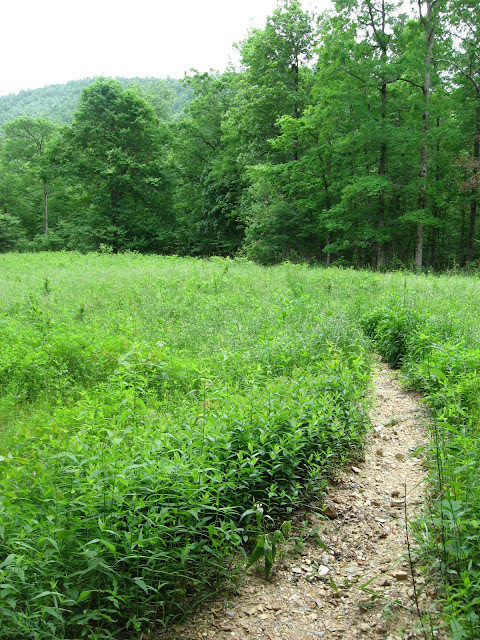 The climb over Brush Heap seemed a little harder than the last time I'd crossed it, then I remembered the last time I hadn't climbed four others before it. I arrived at Eagle Rock Vista around 3:30, and spent some time taking pictures of the wildflowers blanketing the hillside,then sat a while looking out across the hills and valley below. I had considered camping here for the night but it was too early to stop, and the knees felt fine. Later I’d find out that I’d missed seeing a big black bear by about an hour. 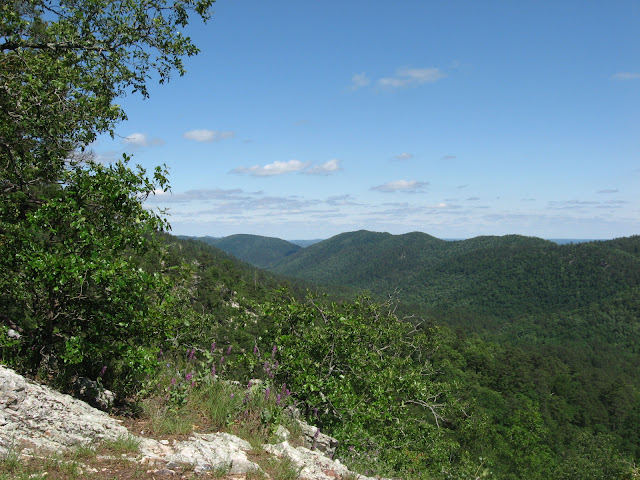 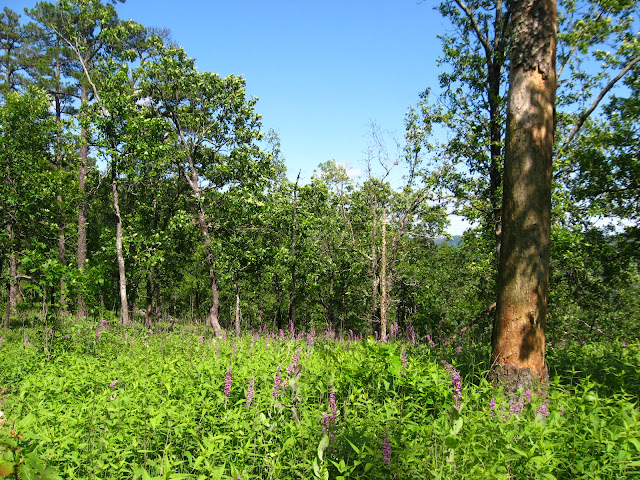 While walking along Viles Branch, I came to my first snake, a cottonmouth, but something wasn't right, and upon inspection, found it had been killed. Why would someone do that? I was incensed that someone would kill a snake just because it was there. I believe it is a case of ignorance that some people think the only good snake is a dead snake. Ignorance is cured by education, stupidity is refusing to be educated. OK, I'm off the soapbox. I came to a suitable camping spot about 5 o’clock and decided to call it a day. 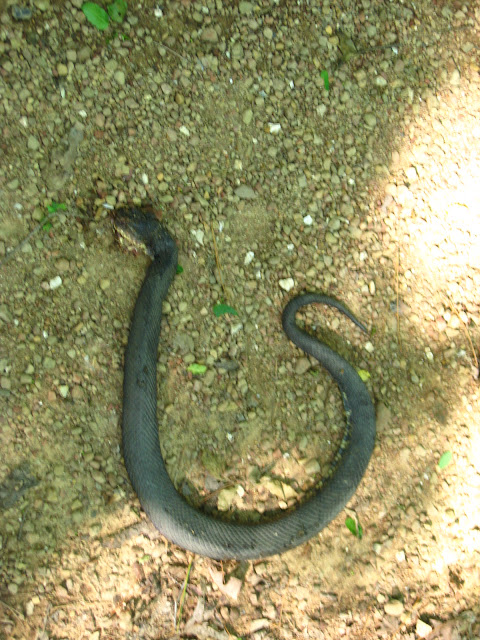 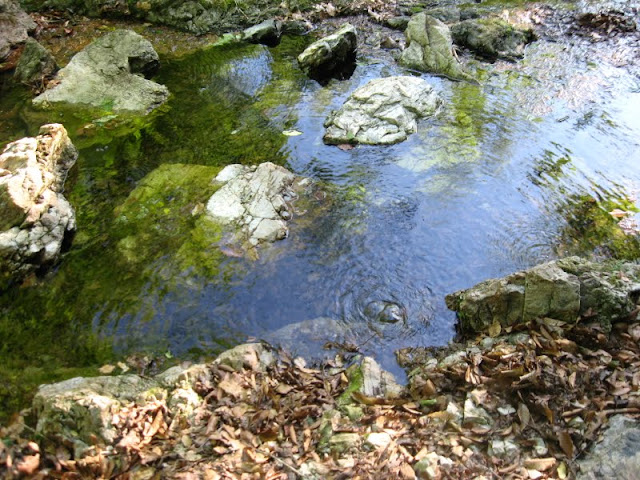 The next morning at 7:45, feeling relieved at making it over the hills, I headed toward Winding Stairs. I had camped just a few minutes west of the rock spring, spent some time there watching the spring bubble up, and reached the first river crossing at 9:20.  Both crossings were easy, as the water was lower now than it had been last fall, despite the recent rains. It was clear that all the spring vegetation was sucking up the water table. I made the last crossing at 11:40, having puttered around Winding Stairs, marking campsites, a couple of downed trees, taking pictures, having lunch and getting water. 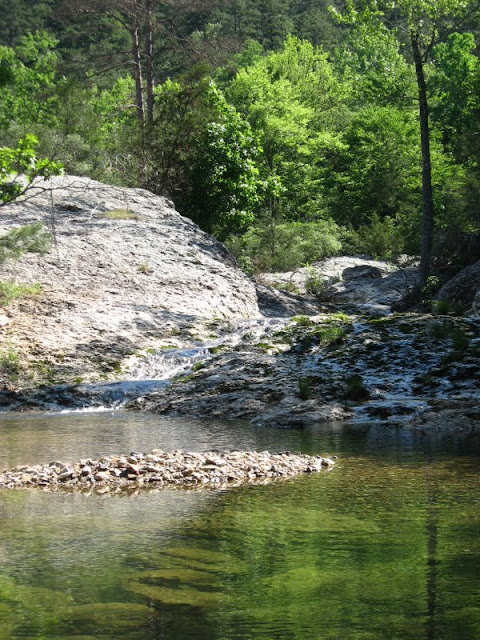 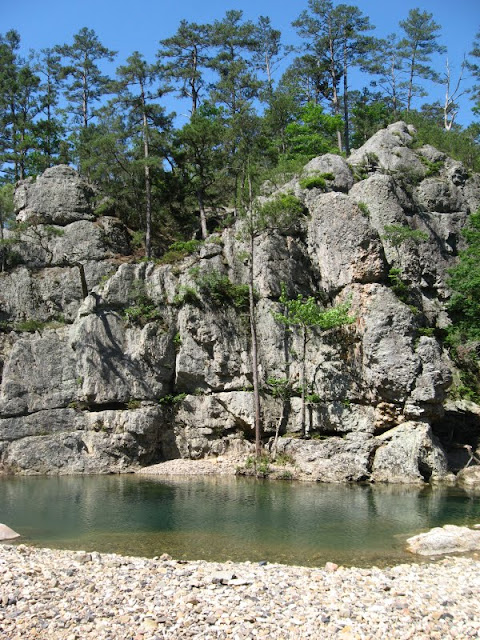 As I made my way along the hillside toward the camping area ahead I came to another downed tree, then looking up the hill saw several uprooted pines. The farther I went the worse it got. The entire camping area was a mess of toppled trees. Pine trees have a shallow root system, and are top heavy as well which makes them especially susceptible to high winds.  There are many very large pines in this area, and it was disheartening to see them lying on the ground like fallen comrades in a war zone. The damage was so bad in one short area that I had to walk far around, sometimes walking down trunks, through branches, and watching for snakes before making my way back to the trail. I had to remind myself that Mother Nature isn’t good or bad, she just is. I reached Blaylock Cr. at 1:30, got water, ate a snack and kept going. 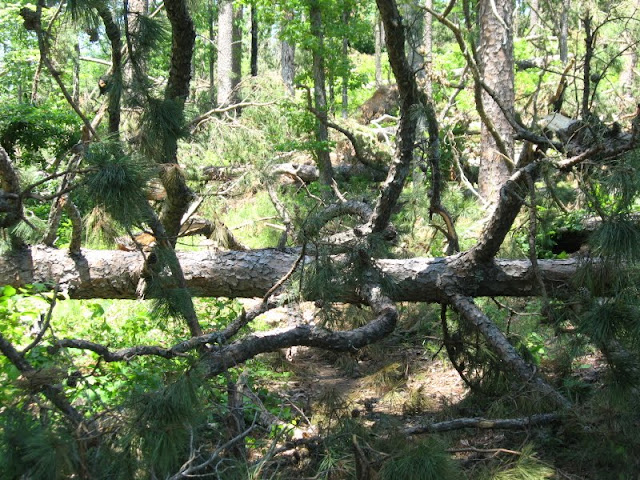 I climbed my last obstacle at Albert Pike, stopping for a minute at the trailhead at 3:15, and crossed Long Cr. at 4:10. I saw my second snake just after crossing. It was small, but alive and well. I bid it a good day and continued until at 4:50 I stopped at  a campsite I’d stayed at with TrailRelic and USAHiker last fall about 10 minutes before the next river crossing. 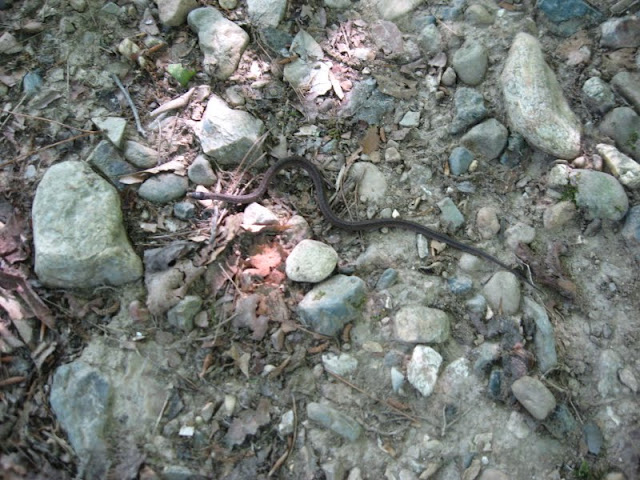 I packed up in morning after breakfast and hit the trail at 6:45 to continue the last section.  I arrived at the Falls at 9:15, stopped for water and a snack at the picnic area, departing at 9:40. I was thrilled to see that the dreaded tree just past the bridge to nowhere had been cut through!!  ULHiker, I thank you and my back thanks you too!!!!  I know that old hickory wasn’t easy to get through with a hand saw! 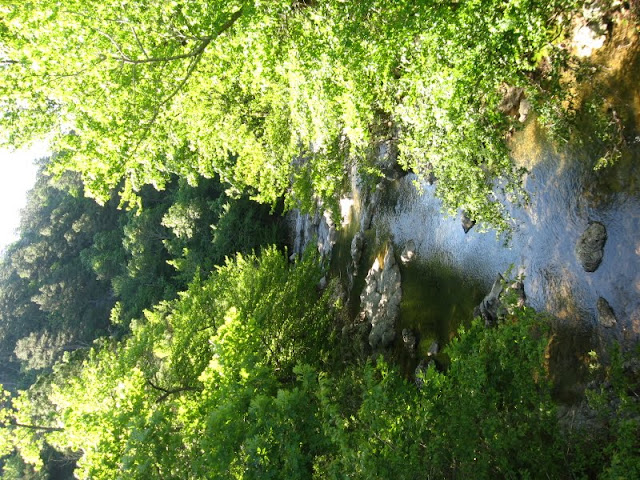 It was another gorgeous day, cool, clear and breezy and being Monday, I didn’t see another soul. I arrived back at my car at 11:35. I couldn’t have asked for a more beautiful weekend! The weather was perfect, there were different wildflowers blooming since my last trip, and my knees had no issues, so something I did worked!

Trail notes:Starting at the upper end and going counterclockwise was great, you get all the hills out of the way the first day, then it’s easy sailing the rest of the way. With a pack weight of only 14 lbs it wasn’t an issue to start there, and it was really nice to get it behind me early. I'd initially been reluctant, thinking it would stress the knees to much to start there, but it was perfect.
Gear notes: I took some different gear this time; a Steripen Adventure Opti, a Granite Gear Vapor Ki pack, a POE Elite AC sleeping pad, a Western Mountaineering Summerlite bag and Mountain Laurel Designs Solomid, with inner net.  I’d tested all at home, or car camping, and was excited to be able to get my weight down a little more. I never carried more than a liter of water the entire trip. I could have carried a ½ liter, but would have had to stop more frequently.  I heart my new Steripen!!!!! Of course I carried an extra platy bottle and purifying tabs as a backup. The shelter worked very well, although I prefer my hammock, but I saved about a pound taking it.I hope to make some changed to my hammock set up to lose a little weight, but sometimes the terrain calls for a tent, so I figured I needed to have one. The pack will work well for short trips where water is plentiful.  It’s still not as comfortable as my Deuter, but at a pound lighter, and smaller volume it was fine. The only problem I had with any of the gear was that the sleeping pad sucked heat from my body, despite the fact it has some material to reflex heat back.  Both nights were in the mid 40’s and I ended up adding my thermals and my dri-ducks to sleep in during the night. I sleep cold, and without the layers I would have been uncomfortable. I will look into coupling it with a 1/8" closed cell foam pad,which can serve as a sit pad. Something else that worked was taking my goosefeet booties in a tiny stuff sac for a pillow. Once I remedy the pad issue, I can leave the pillow and use the raingear for a pillow. Another thing that really worked well was taking one of the toggles I use for my hammock and using it in place of a stick for hanging my food. I'd seen a video showing how to use a piece of pvc instead of a stick, and thought, why not use a toggle, lighter than pvc, and I already had it. Perfect!  I love it when I'm smart!
Note on solo hiking: I'm sure there are those that think I'm crazy for hiking alone. I do not condone hiking alone. I like to hike with others, and when I can, I do. However, when the opportunity arises, and no one can join me, I refuse to stay home. Life is short, especially at 57. My mother died of cancer at 56; father, and younger brothers are gone as well. I just can’t sit around wasting time while there is a wilderness out there to explore! It's just not in my genetic makeup. I have to hike!  There is also something very spiritual about hiking alone, but that's another issue.
Is there a risk in hiking alone? Absolutely! And, I'm painfully aware that one misstep can be potentially disastrous. All I can do is try to minimize the risk. I carry a PLB, leave my itinerary with two friends. I go slow and pay attention to every footfall. If I look at something on the trail, I stop first. I walk through water instead of rock hopping unless I’m certain it’s safe. I practice good hygiene to keep from getting sick. I hang my food and toiletries, and carry bear spray most of the time.
I take a risk every time I step into the wilderness alone, and given enough trail time I will likely push the envelope too far. But that beats the alternative of sitting around getting old and ending my life in a nursing home or alzheimer's unit. We all take a risk every time we get in a car and leave home to go to work or anywhere else. So for me, the reward is worth the risk.
Posted by Leigh at 7:05 AM

Leigh
I'm happiest when I'm in the woods, or on the water.